Member of Parliament for Hornchurch and Upminster

Julia Lopez MP has represented the constituency of Hornchurch & Upminster in parliament since June 2017. At the 2019 General Election she was re-elected with an increased vote share of 65 per cent and majority of 23 308, making Hornchurch & Upminster the strongest Conservative seat in London. She was promoted by the Prime Minister to Parliamentary Secretary in the Cabinet Office in February 2020, having served on the International Trade Committee in the 2017-2019 parliament. 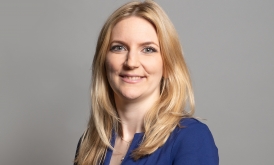